Reliance Jio, the telecom services provider from the Reliance Industries group, is likely to launch its own cable TV services, according to photographs uploaded by anonymous users on web forums.

The photographs were apparently taken at the demonstration of the new service, and come several months after rumors started circulating that the company will launch a DTH service.

However, as we reported in November, the company is not known to have engaged any satellite service provider for Ku band capacity, which is required to launch a DTH service.

The latest photographs suggests that the company is indeed looking at the channel distribution space — but from a different angle.

Part of the reason for entering the cable business may be obvious synergies between the channel distribution service and Jio’s mainstay broadband service. 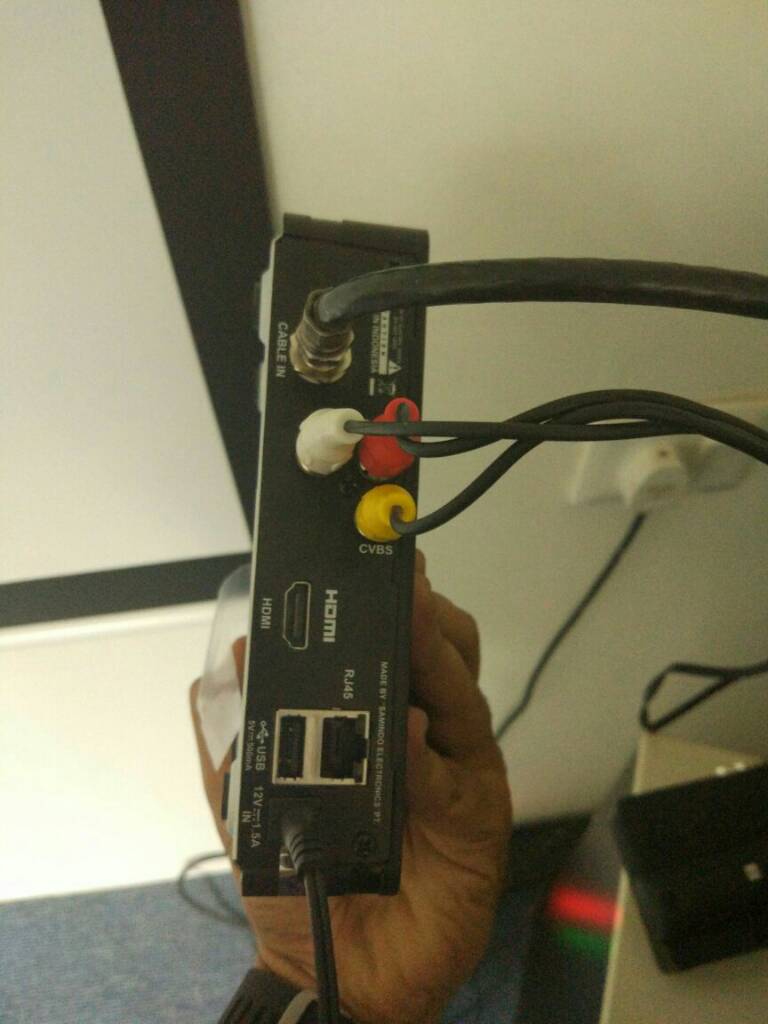 According to the photographs, Jio’s cable set-top-box will come with an ethernet port to connect it to a modem or router for internet.

This will enable the set-top-box to fetch old programs via the internet, allowing viewers to rewind channels or watch video-on-demand.

Similar services are also available in some of the newer models of set-top-boxes launched by rivals such as Airtel Digital, a DTH service.

Airtel had also introduced a dongle-based service that allows users to watch out-of-order programs using the internet. The device had to be attached to the set-top-box to enable it to download content via the user’s local broadband connection.

Unlike in other countries, in India, most of the ‘last mile’ connections to cable subscribers are owned by very small ‘local cable operators’.

Large players survive by providing their feed to these smaller operators, who take care of collections, provisioning and the maintenance of the local infrastructure.

This has prevented the spread of cable broadband in the country as the small operators often do not have the expertise, scale or funds required to operate such services.

Jio’s move also comes in the wake of a reverse move by cable companies such as Hathway Cable & Datacom and Siti Networks into the high-speed broadband space.

Some of the large feed-providers have tied up with cable operators to deliver fiber or cable broadband to their subscribers. Some have also bought out the local cable operator using lumpsum payments, but the penetration of such services remains low.

Hathway is the biggest such provider with operations in 20 cities and over 7-8 lakh subscribers for its internet service.

It recently said it will double the data allowance for its high-speed internet plans in light of increasing competition in the field and will increase investment into the business.

In addition, there are also standalone fiber players such as Spectranet, which offer some of the lowest rates of high-speed broadband in the country.

GTPL Android box coming in two weeks, soft-launch done The Android box will be launched as part of this year's Festival Dhamaka GTPL Hathway, one of the country's largest…
Vodafone Idea to launch free music streaming service for users Airtel Wynk Music Vodafone Idea, the country's third largest telecom operator, said it plans to launch a music streaming service…
Airtel Broadband adding 1 town/day; Target 2000 towns in 3 years Bharti Airtel, formerly India's biggest telecom operator, announced plans to take its fiber-based broadband services to nearly every town in…
Amazon starts Fire TV broadband service in India Amazon has expanded its Fire brand of devices and software to the service sector with the launch of its Fire…
Hinduja's NXTDigital signs up 3 MSOs for infra-sharing Company's combined broadband+cable+OTT box available in Mumbai NXTDigital, the television channel aggregator, said it has signed on three MSOs in…
Bharti takes Airtel Broadband to 72 new cities in 3 months Bharti Airtel reported yet another strong quarter of financial and operational performance as it continued to benefit from increased demand…
Reliance Industries forms trading subsidiary in the UAE Reliance Industries, India's most valuable company, has established a subsidiary in the United Arab Emirates. The company said it invested…
Reliance Industries 'categorically denies' any interest in BT Reliance Industries said it wants to 'categorically deny' any plans to bid for British wired services operator BT. "We categorically…
RailWire targets Jio, Airtel with 20x growth in 2 years RailWire, the consumer broadband arm of connectivity provider RailTel, said it plans to invest Rs 125 cr in coming months…
GTPL expands broadband via LCOs; revenue up 10% in 3 months GTPL Hathway Q2 Results GTPL Hathway, the No.2 cable feed provider and No.6 wired internet provider in India, has started…
Delhi Police says we only want info from Twitter Delhi Police today said it only wanted to ask Twitter for any information the company had about the so-called manipulation…
HCL Tech wins five-year deal from German chemical co Noida-based IT and outsourcing services provider HCL Technologies (HCL) said it signed a five-year, end-to-end IT transformation services deal with…
HFCL to become 5G supplier, sets up dedicated unit Telecom equipment and services provider HFCL Ltd said it plans to offer 5G equipment and turnkey services, marking a move…
Bharti Airtel gets Rs 1,004 cr from Jio for CDMA spectrum Bharti Airtel said it has closed its deal to transfer CDMA spectrum to Reliance Jio Infocomm and received the money.…
NTO-2 rollout: GTPL to work with channels to prevent disruption GTPL, one of the top cable feed providers in India, said it hoped to work with channel broadcasters over the…
RailWire promises tough fight to Jio, Airtel RailWire technicians carry out repairs | Image: RailTel Railtel Corporation of India, the telecom unit of Indian Railways, said it…
BSNL opens 449 fiber plan to everyone, Kerala Vision unveils new tariff Kerala Vision, the ISP with the largest network in Kerala, has unveiled a new set of tariffs, after its primary…
Pune-based fintech startup offers free credit cards With youngsters increasingly preferring non-traditional careers and gigs for their livelihoods, several financial services startups have also sprung up to…