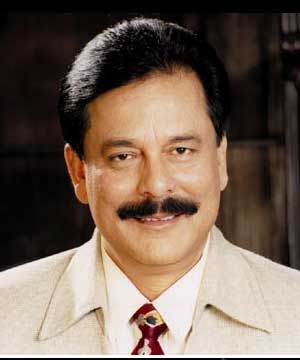 The following is the full text of the statement from Sahara Group on the arrest of its chairman and founder Subrata Roy.

“We are meeting at a time when our organization has been very wrongly interpreted and presented in public against the backdrop of the ongoing Sahara – Sebi case.

As the matter is Sub-judice, we cannot bring forward many things pertaining to the case but being an organization like Sahara India Pariwar with an investor base of more than 8crore and having kartvyayogis in tune of 12 lakh, we feel it is our moral right and duty to come forward and dispel some misconceptions which are being created by parties having vested interest in the dust of ongoing dispute.

As you are aware of the happenings in this case and the developments of last two days, we wish to put forward the facts for the understanding of our esteemed investors / customers / kartavyayogi karyakartas, associates and business partners / our well wishers and public at large.
On 20th Feb’14, Hon’ble supreme court orders our Chairman Sri Subrata Roy Sahara (Saharasri Ji) and 3 other directors to appear in person in Hon’ble supreme court to be a part of the proceeding of that particular day related to the ongoing dispute of our two companies namely Sahara India Real Estate Corporation Ltd and Sahara India Housing & Investment Corporation Ltd with Securities Exchange Board of India (SEBI).

On 22nd Feb’14,Saharasri Jiarrives in Delhi to have one on one meetings with our Senior Legal Counsels namely Shri Ram Jethmalani& Shri AryamaSundaram and thereafter to attend the proceedings in Hon’ble supreme court on 26th Feb’14 along with other three Directors

On 24thFeb’14, towards late evening Saharasri Jiis informed that the health condition of his mother Smt.Chabbi Roy, aged 92years, who has been unwell for some time and is being attended and treated at Sahara Hospital in Lucknow, has suddenly deteriorated and her situation is critical.

Saharasri Jibeing the eldest child of his mother and also being very attached to her decided to go back to Lucknow immediately with a private charter to be with his ailing mother at this critical moment as any son would have done in order to fulfill his emotional duties and obligations towards his mother.

After arriving in Lucknow and understanding his mother’s fragile conditions Saharasri Jidecides to stay back in Lucknow to ensure proper support and care for his ailing mother.

Having taken this decision absolutely on Humanitarian and Emotional grounds he was also conscious of the directions given by Hon’ble Supreme Court. Therefore, he instructs the legal team to move an application to the Hon’ble Supreme Court immediately seeking an exemption from the hearing for that particular day. While the rest of three directors were to attend the proceedings, his inability to attendwas also communicated in writing to our Senior Counsels personally bySaharasri Jiciting the reasons in detail.

Accordingly the very next day i.e. 25th Feb’14 our senior counsels Shri Ram Jethmalani and Shri Ganesh move a special application for seeking personal exemption along with a medical certificate issued by Padamshree Dr. Mansoor Hasan Head of Cardiology Department of the best Hospital in City of Lucknow run by Sahara India Pariwar, which clearly states the fragile and deteriorating condition of Saharasri Ji’s Mother.

Accordingly the same matter was mentioned infront of the special bench, however the Hon’ble Justices did not grant us the short relief citing the reason as their inability to modify the order dated 20th Feb’14, subsequently Hon’ble Justices asked our counsel to take up the matter on the date of hearing that is 26th Feb,’14.

It is pertinent to mention that the condition of Saharasri Ji’s Mother continued to remain fragile and he decided to stay back in Lucknow at the side of his mother during this extremely critical phase hoping that Hon’ble Supreme Court will consider his request on humanitarian grounds.Inspite of being so emotionally low Saharasri Jiagain writes a personal letter to Shri Ram Jethmalani Ji expressing his helplessness to leave lucknowwith a request to read out this letter during the court hearing .

On 26th Feb,’14 Senior Counsel Shri Ram Jethmalani informs the special bench about Saharasri Ji’sinability to be present in Hon’ble Supreme Court to attend the hearing on 26th February due to the critical condition of his mother. However, the justices pass an order to serve non bailable warrant in the name of Saharasri Jiand in order to ensure the presence on the next date of hearing i.e. on 4th March ’14.

On 27th Feb’14 Sahara files a special application seeking the recall of the non-bailable warrant issued with an undertaking of Saharasri Jito be present on 4th March’14 without fail.On 26h Feb’14 evening,Lucknow police visits Sahara Shaher in Gomtinagar Lucknow to serve the warrant to Saharasri Ji.

During the same time, he was out of Sahara Shaher Lucknow to consult with the panel of doctors with certain medical reports of his mother and then also to visit a lawyer’s residence.

On his return late in the evening, Saharasri Jiwas informed by the family members about the police visit and about the news appearing in certain section of India across the country.

On 28th Feb’14, in the early morning hours, as a law abiding citizen he willfully decides to submit himself to Lucknow police based on the warrant issued and asks them to proceed with their call of duty as per the directions given by Hon’ble Supreme Court.

Today morning, our senior counsels have again approached Hon’ble Supreme Court with a plea and a personal appeal from Saharasri Jito recall the non-bailable warrant as he has willfully submitted himself to the Lucknow police. He gave an assurance to be present in Hon’ble Supreme Court on the day of next hearing i.e. 4th March’14.

At this moment, as we speak Saharasri Jiis with UP police and cooperating wholeheartedly with all the authorities in order to ensure the direction given by Hon’ble Supreme Court.

For the consumption of all those who are associated directly or indirectly, nationally and globally, with us, we wish to reiterate the fact that Sahara India Pariwar has always put our beloved nation ahead of any business interest and have always have ensured compliance to the law of the land across our businesses and processes.

From a humble beginning in 1978, Sahara India Pariwar has created many milestones in the journey and today we have a huge asset base which includes our 12Lac + karyakartas and more than 8 crore investors. In the past also, we have faced many difficulties and each time we have reemerged more strongly and firmly. In our endeavor to built our nation, we not only diversified our business in the country but also expanded globally.

As you are aware that we are fighting an ongoing long legal battle and are confident that it will arrive to its logical conclusion soon, having stated the above, as a responsible business organization with high level of discipline and ethics we are committed to abide by the law of the land as we have been practicing always.

Last but not the least, Sri Subrata Roy Sahara to me is not only a doting father but also a patriotic son of the soil who has contributed immensely to the country in many ways whether it is various social causes impacting lives of people across the length and breadth of the country or whenever India needed its son to stand up and shoulder responsibilities like helping the families of Kargil martyrs, Mumbai terrorist attack martyrs and victims of earth quacks, floods and other forms of natural calamity. Today it pains me to see his reputation and image being maligned in this manner and I humbly seek your support and cooperation.
In the end I would like to read a small message Hon’ble Saharasri Ji

“My office, my collegues, my family members are continuously getting calls, sms etc from media friends, relatives. They want to hear from me. All I want to say is This Is The Best Honour My Country Could Give Me”